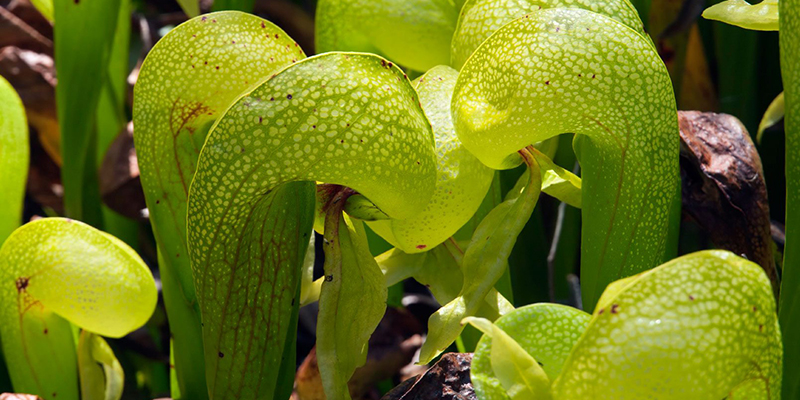 One of the few carnivorous bromeliads is Brocchinia reducta. It is found in nutrient-poor soil and is endemic to southern Venezuela, Brazil, Colombia, and Guyana. B. reducta adapts to its surroundings by using its roots as anchors while growing on rocks. It can adapt to any type of environment. The plant catches animals using its overlapping leaves, which form a water-storing cup. The leaves have waxy scales on them that reflect UV light. Along with the UV rays, the water in the cup has a delicious odour, which attracts ants and other insects. Sarracenia is a genus of North American pitcher plants that includes 8 to 11 species known as trumpet pitchers. The genus is part of the Sarraceniaceae family, which includes the closely related genera Darlingtonia and Heliamphora. All of the plants are indigenous to North America. To lure the animal into the pitcher, the plant uses scent, honey, and colour. Because of the slick surface and small hairs in the tube, the insect is unable to escape once caught. The bug is drowned and digestion begins as a result of the digestive enzymes in the pitcher. Heliamphora is a genus of pitcher plants with 23 species indigenous to South America. The species are generally known as sun pitchers, owing to the erroneous belief that Heliamphora’s heli is derived from the Greek helios, which means “sun.” Heliamphora is a genus of carnivorous plants endemic to South America, with roughly 23 species. Pitfall traps are used by the plants to lure and kill animals, but digesting requires the assistance of symbiotic bacteria. Their leaves are shaped like tubes that hold water. When the prey falls into the water and drowns, germs help the plant digest it. The majority of the plants in this genus eat ants. Pinguicula, sometimes known as Butterworts, is a genus of carnivorous plants with roughly 80 species. They may be found mostly in North America, Europe, and Asia. Pinguicula’s trapping technique is facilitated by two glands on the leaves. The Peduncular gland, for example, secretes a mucilaginous material containing digesting enzymes that forms droplets on the leaf surface. When an insect lands on these droplets, the gland generates additional mucilage, which coats the bug. Utricularia, sometimes known as Bladderworts, is a genus of carnivorous plants that includes over two hundred species. They may be found in both terrestrial and aquatic forms on every continent except Antarctica. Utricularia uses bladder-like traps to catch protozoa, mosquito larvae, and fish fry, among other things. The sensitive hairs are attached to the trapdoors. The bladder, which is under negative pressure in comparison to its surroundings, pulls the prey into itself when it is activated by the prey. Byblis is a tiny genus of carnivorous plants known as the rainbow plants because of its colourful mucilage-covered leaves under intense sunlight. It is the sole genus in the Byblidaceae family and is native to western Australia. Byblis is a genus of tiny carnivorous plants native to Australia. They are little plants with a passive trapping mechanism, often known as Rainbow plants. Byblis is divided into eight distinct species. The plant’s leaves are coated with tiny glandular hairs that secrete a mucilaginous material. Flying insects are attracted to the sticky substance, and when they land on the leaves, they become trapped. Nepenthes is a genus of plants that includes roughly 150 species and is also known as Monkey Cups or Tropical Pitcher Plants. South East Asia, China, India, Madagascar, Seychelles, and Australia all have these ambitions. Monkey Cups gets its name from the fact that monkeys frequently sip water from the plant’s pitchers. A pitcher is created at the tip of tendrils on the leaves in the trap. It includes a slick fluid that causes the prey to sink. The glands in the lower section of the trap take nutrition from the prey. Darlingtonia californica, also known as California pitcher plant, Cobra lily, and Cobra plant, is the only species of the Darlingtonia genus. Pitcher traps are used by this carnivorous plant, which is mostly found in Northern California. Unlike other pitcher plants, however, this one does not store rainfall but instead pumps it from its roots. The plant features multiple false exit points targeted at exhausting the victim, in addition to the conventional elements of a pitcher trap. The Venus Flytrap, scientifically known as Dionaea muscipula, is possibly the most well-known of all carnivorous plants. The plant, which is endemic to the Eastern United States, eats little insects. When the sensitive hairs on the leaves are aroused, the trapping mechanism is activated. The leaves are instantly snapped shut. The plant digests and consumes the prey after it is caught inside. The Venus Flytrap takes around ten days to entirely digest its victim.