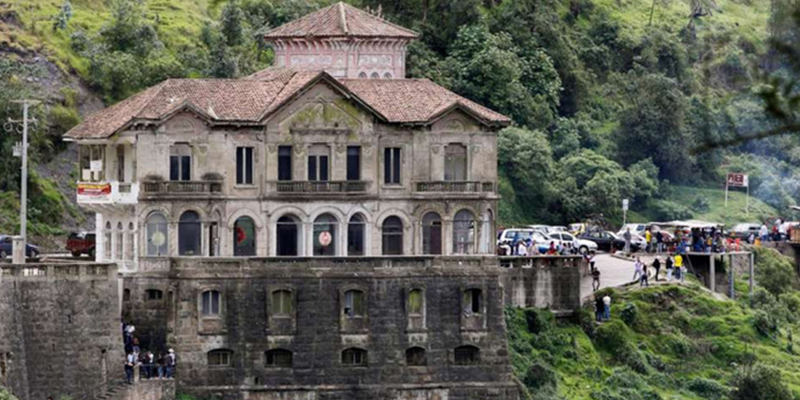 The Ryugyong Hotel is a 105-story pyramidal skyscraper in the heart of the North Korean capital. Its construction began in 1987, and it was set to be completed in 1989. Unfortunately, the North Korean aim was not adequate, and building was halted in 1992 after the Soviet Union, which provided much of the raw materials and logistics at the time, abandoned and disintegrated. For 16 years, it had no windows and was utterly devoid of any interior. However, owing to an Egyptian group’s financing, its construction was abruptly revived in 2008. The town of Kupari, located on the Dubrovnik Riviera, was a popular holiday spot for top Yugoslav army leaders. The Grand Hotel, which had a private beach access and was established in the 1920s, did not become renowned until the 1960s and 1970s, when the region’s tourism boomed and many other hotels were erected around it. The Civil War raged in 1990, and the hotel, like the others, was plundered. It has never been reopened since it was abandoned. In Liberia, the Ducor Palace was the most opulent 5-star hotel. When it first opened in 1962, it was frequented by the country’s biggest stars and passing politicians. When the political situation became too precarious in the 1980s, the prominent hotel was shuttered. During the civil war that ensued, most of the hotel was damaged, and the very poor family took advantage of the chance to settle. Lee Plaza is a 15-story skyscraper that was constructed in 1929. It was designed to entice visitors to remain as long as possible, and the proprietor had thought of everything: a hair salon, a library, stores… They were all lavishly embellished with the greatest paintings and marbles. It changed hands multiple times throughout the years and began to age with permanent occupants in the 1970s and 1980s. After the murder of a resident, it was forced to close its doors in 1997. It was set to be demolished, but due to its architecture and history, it was designated as a historic monument. The Polissya hotel is one of the tallest structures in the Ukrainian ghost town of Pripyat, which was erected in the 1970s to accommodate tourists to the Chernobyl nuclear power plant. It has been abandoned since April 26, 1986, following a plant disaster, and today, like the rest of the ghost town, it is on the verge of collapsing. It also acts as the setting for one of Call of Duty: Modern Warfare’s missions. The Hotel Baker, which opened in 1926 in a tiny Texas town, was one of the most ambitious hotel ventures in this burgeoning seashore region. It was the first hotel in Texas to have an Olympic-sized pool, and it could hold up to 2,500 people. Despite the 1929 stock market crisis and great problems in the 1930s, the shock lasted until the conclusion of WWII, when the owner failed to place the key beneath the door in 1963. Following a temporary revival in 1965 and a series of owners, the hotel shuttered its doors for good in 1972. It was purchased by the ILGWU, a predominantly female labour union, who renovated the building and turned it into a place for exchange, solidarity, and visibility for the labour movement. It was built in 1892 on a site of about 12 000 hectares to accommodate Jewish-German travellers. It was shut down in 1990 due to a lack of funds, yet it lived on in the minds of American blue collar workers.

This big hotel complex (holiday camp centre) was quite famous in the 1960s, and it was located in the Catskill Mountains in upstate New York. Every year, almost 150 000 people, including celebrities and officials of the period, visit to spend their vacations. The massive complex, which included around 35 structures, covered almost 5 square kilometres. The hotel, like many others in the neighbourhood, closed in 1986 after a change of ownership, with the latter unable to support the increased site activity. This hotel, located in Baguio City, Philippines, is said to be one of the country’s most haunted locations. The Dominican order opened it as a vacation residence in 1915, calling it “Dominican Hill” (Dominican Hill). During WWII, this location was extensively destroyed and inhabited by Japanese evacuees. In 1947, it was partially reconstructed. Diplomat Hotels Incorporation purchased the property in 1973 and converted it into a 33-room hotel. The hotel discontinued operations following the death of the owner, Tony Agpaoa. The hotel was once a private residence built in 1923. It was transformed into an eight-story hotel in 1950, and because to its architecture and the French, it became a symbol of enormous riches in the valley. It was closed down in the 1990s due to pollution from a nearby river, as well as a high number of suicides near the Tequenda Falls and at the hotel itself. Some locals believe it is haunted by the tortured ghosts of those who have committed suicide. It has since been repaired and turned into a biodiversity museum.