Top 10 Bill Gates Suggested Books for You to Read 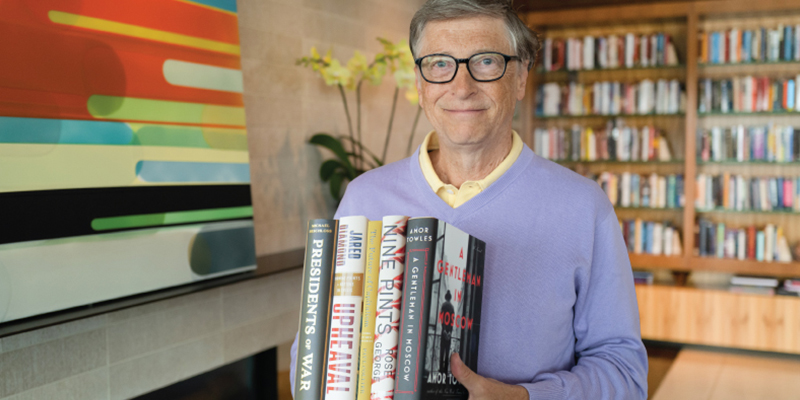 Top 10 Bill Gates Suggested Books for You to Read

10 ‘The Ten Commandments for Business Failure’ by Donald R. Keough

Donald Keough tells the narrative of his sixty-year career to the rest of the globe. He talks about his own failures as well as some other well-known failures. Quit Taking Risks; Be Inflexible; Assume Infallibility; Put All Your Faith in Experts; Send Mixed Messages; and Be Afraid of the Future are among his failure commandments.

“The bleak results presented in Academically Adrift are based on the Collegiate Learning Assessment, a standardised test in which students are asked to make a practical decision–such as what kind of aeroplane a company should buy–and explain their choice based on a set of goals and facts about various options,” Gates said of the book. I believe that innovation has the potential to help alleviate many of the challenges that plague our post-secondary education system. However, we require more and better data.”

8 ‘Moonwalking with Einstein’ by Joshua Foer

“Like most people, I’m interested by how the mind works, and memory is a significant part of it,” Bill Gates said of the book. Part of the appeal of this book is that it demonstrates how memory and comprehension are not mutually exclusive. Building reasoning skills and knowledge retention skills go hand in hand.”

7 ‘The Language Instinct: How the Mind Creates Language’ by Steven Pinker

The Language Instinct, a famous study on all potential features and dimensions of language, was published in 1994 by Steven Pinker. It is written for a general audience and covers topics such as how language works, how we learn it, how our brain processes it, and how it evolves over time. The American Psychological Association awarded the book the William James Book Prize, and the Linguistics Society of America gave it the Public Interest Award.

6 ‘Life is What You Make It’ by Peter Buffett

“Contrary to popular belief, Peter will not receive a large chunk of money from his father,” Gates added. His parents, on the other hand, pushed him to forge his own path. The book is a record of his trip, as well as the insights and perspectives he has gained along the way.” Despite being born into a wealthy family, Peter opted not to live in the shadow of his renowned surname.

5 ‘Where Good Ideas Come From’ by Steven Johnson

“It’s a worthwhile book, especially for individuals in business or education,” Bill Gates wrote. It discusses the institutional structures that support good ideas, such as “how to get a lot of people thinking about cutting-edge problems, how to bring people together in a space where different skill sets and influences can collide, and how to make the right materials available without forcing a conclusion.”

4 ‘Tap Dancing to Work: Warren Buffett on Practically Everything, 1966-2012’ by Carol Loomis

“I believe anyone who reads it cover to cover will come away with two reactions: first, how Warren has been incredibly consistent in applying his vision and investment principles over the course of his career; and, second, that his analysis and understanding of business and markets remains unparalleled,” Bill Gates wrote about the book. Carol Loomis of Fortune magazine assembled Tap Dancing To Work, an amazing collection of articles and essays on and by Warren Buffett.

3 ‘Better Angels of Our Nature’ by Steven Pinker

“Today, more than two decades after Warren loaned it to me–and more than four decades after it was first published–Business Adventures remains the finest business book I’ve ever read,” Bill Gates said about the book. “My favourite business writer is still John Brooks.” Gates was so moved by the book that he made a short movie about it.

1 ‘My Years with General Motors’ by Alfred Sloan

“My Years at General Motors is arguably the finest book to read if you only want to read one book on business,” Bill Gates told Fortune. When it was initially released, this New York Times bestseller was an instant smash. Sloan’s fifty years at GM are chronicled in My Years at General Motors. How he rose to the top in his field and eventually took over the firm. How he was able to make the firm profit at an unparalleled level.