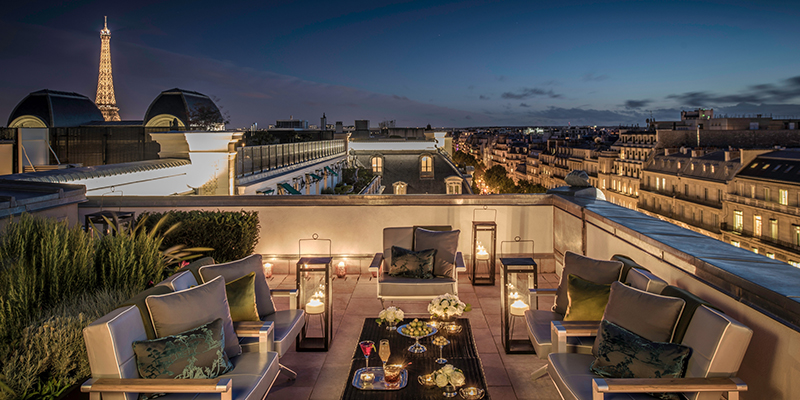 The Park Hyatt’s prized position, overlooking the famous Rue de la Paix and within walking distance of the Place Vendôme and Opéra Garnier, brings the city to your doorstep. The hotel is one of the most aesthetically spectacular luxury hotels Paris has to offer, having been accepted into the elite Palace Hotels Group. The hotel’s unique combination of contemporary architecture and classic design was designed by renowned designer Ed Tuttle, affording it a sensuous, subtle elegance that pervades the property – from the luxurious Parisian guest suites to the engaging communal spaces and magnificent conference rooms. The Oetker Collection’s Le Bristol Paris is situated on the famed rue du Faubourg Saint-Honoré in the heart of Paris’ fashion and arts area, where it has been hosting distinguished visitors since 1925. The hotel’s 188 rooms and suites have been extensively renovated and are big and light, with typical eighteenth-century décor. Spa Le Bristol by La Prairie is a three-story facility with eight treatment rooms, including two twin rooms, a gym, a hair salon, and the ‘Les Amis d’Hippolyte’ children’s play area. Epicure, the hotel’s three-Michelin-star gastronomy restaurant, greets visitors with bay windows in a newly designed environment. Mandarin Oriental is located in the centre of Paris, on rue Saint-Honoré, one of the world’s most fashionable streets. The hotel emanates a timeless elegance with magnificent, modern furnishings, surrounded by fine fashion and only steps from the Louvre. The 138 rooms and 39 suites are among the city’s most fashionable and large, with beautifully designed and tastefully fitted interiors. The Mandarin Oriental’s bar and restaurants are among the best in Paris, serving cutting-edge cuisine, delectable light meals, and seductive drinks in a refined setting.

The Dorchester Collection’s Hôtel Plaza Athénée has been greeting visitors pleased to stay on avenue Montaigne, the hub of high fashion, since 1913. The hotel is still in a great location for visitors who wish to see the city’s finest retail outlets. Guests rest in exquisite accommodation with views of the Eiffel Tower or the picturesque courtyard with its trademark red awnings, which is ideal for al fresco dining in the summer and has its own ice rink in the winter. All of the hotel kitchens are overseen by Alain Ducasse, a world-renowned chef with numerous Michelin stars. Another hotel attraction is Europe’s first Dior Institute, which offers special spa treatments for ultimate relaxation. Le Royal Monceau, Raffles Paris is the essence of Parisian liveliness and elegance, located only steps from the Champs Elysées and the Arc de Triomphe. Philippe Starck built this contemporary masterpiece, which has 149 large rooms and suites, a 99-seat theatre, and an exclusive private art collection. The ethereal white spa, which has the largest swimming pool in a Paris hotel, is the ideal urban hideaway for total relaxation and enjoyment. Dining at Le Royal Monceau – Raffles Paris’ restaurants is a truly memorable experience, from Matsuhisa’s modern Japanese cuisine to Michelin-starred restaurant Il Carpaccio’s celebration of Italian regional food. In Paris, there are many of luxurious royal hotels, but the Four Seasons Hotel George V may be the most entertaining. Why? Jeff Leatham, a world-renowned artistic director, has created flower arrangements that can be found around the hotel and in the stunning marble courtyard. This enormous luxury hotel stands in an original 1928 landmark Art Deco structure boasting an excellent Art collection, only steps from the Champs-Elysées, in the centre of the famed Golden Triangle of Paris. The 244 redecorated rooms and suites provide a one-of-a-kind environment reminiscent of opulent Parisian residences, complete with breathtaking views from multiple terraces.

The legendary Paris grande dame, where Princess Diana spent her last night, reopened in 2016 after a four-year makeover by renowned architect Thierry W. Despont restored the house to its previous Belle Époque splendour. Most of the 71 rooms and 71 suites have a shaded private patio with a view of the hotel’s spectacular French-style gardens and are decorated in soft pastel tones with excellent woodwork. The 15 prestige suites are named after renowned visitors who have been at the hotel in the past, such as Marcel Proust, Coco Chanel, and the Duke of Windsor. After a few of days of visiting the city. With the advent of the Peninsula Paris in August 2014, Hong Kong-style luxury arrived in the City of Light (albeit two years behind schedule). Some of France’s greatest artisans were hand-picked to undertake the restoration of this late 19th century classic Haussmanian edifice and transform it into a luxury hotel, which took six years to complete. The hotel is located at 19 Avenue Kléber in the centre of Paris, only steps from the Arc de Triomphe and close to some of the world’s most famous landmarks, museums, and luxury shopping areas. The 200 rooms and suites are built for optimum comfort, ensuring a restful night’s sleep. The Shangri-La Paris, built in 1896 as the house of Prince Roland Bonaparte, is a symbol of luxury and elegance. The hotel was restored by famous architect Richard Martinet and interior designer Pierre-Yves Rochon to give a distinctly Parisian experience, combining a feeling of history and grandeur with contemporary comfort and service. The hotel’s breathtaking views of the Eiffel Tower underline its standing as one of Paris’ best, and its central location in the 16th arrondissement guarantees easy access to the city’s most famous attractions. The 101 rooms’ old-world beauty, beautifully embellished with exquisite craftsmen’s work.

The Hôtel de Crillon, which was erected in 1758, has an unmatched view of the Place de la Concorde. After a four-year renovation, the building reopened in 2018 as a Rosewood Hotel, with its history serving as a fascinating background for its modern-day tale. Master craftsmen, artists, and designers worked diligently during the hotel’s shutdown to establish a careful and delicate balance between conservation and reinvention. The hotel’s 78 rooms, 36 suites, and 10 flagship suites have a pleasant and elegant domestic feel. Karl Lagerfeld, the late fashion designer, designed two extraordinary suites known as “Les Grands Appartements.”